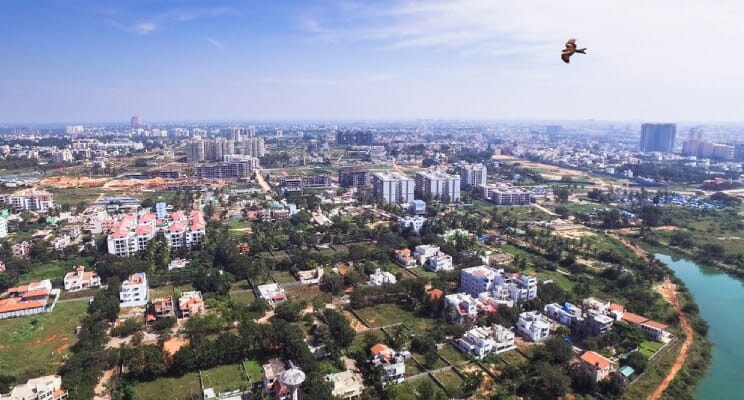 The announcement of international Airport in 2008 has revolutionised the  thought process of the real estate sector. Devanahalli has started becoming the new residential and commercial hub of Bangalore. It is now popularly known as “New bangalore”. It has been a dream for every developer to possess a land parcel in such a dream location and that journey has already started.

Over the years, Bangalore, the Silicon Valley of India, has seen a growth in demand in the real estate sector. People looking for better job opportunities prefer settling down in Bangalore over any other city in the country. The IT boom in the city has provided a boost to the real estate sector, be it commercial or residential property. People looking to buy/invest in real estate prefer neighbourhoods in Central Bangalore to be closer to their workplace. However, builders have noticed a shift in this sentiment. People these days are looking to move away from the hustle and bustle of the city, making the demand for areas located in the outskirts of Bangalore, more than ever before. Devanahalli is one such area that is emerging as a popular real estate hub, here’s why –

Industrial Hub: With top IT parks like the Aero SEZ, Hardware IT Park and International Tech Park located in Devanahalli, it is becoming a considerable technological hub in Bangalore. There are more upcoming IT parks like the Multibillion-Dollar Business Park, Science Park and Financial City that will further make the area stand out. These major projects will attract more investors and the working force. The  Bangalore Aerospace Park is spread across 950 acres of land, including the 250-acre special economic zone, that includes leading companies like Boeing and Airbus. This will create more job opportunities for people residing in Bangalore. Infosys has also acquired 10 acres of land in Devanahalli. The area is all set to be the industrial/employment hub in Bangalore.

Better Prices: The right time to buy or invest in property is right now. Compared to other parts of the city, the property prices in Devanahalli are low. But with upcoming projects like extended metro lines and IT parks in the vicinity, the prices will rise in no time. So, if you are looking to invest in property, the time is now. The properties in Devanahalli offer excellent appreciation value as well. Residential properties in the vicinity have seen a 12%-20% appreciation in value over the past in a  year. The majority of property found here are plots that have so much to offer in the long run.

Connectivity: The Kempegowda International Airport has aided the connectivity to this part of the city. There are BMTC buses that run to and fro at regular intervals throughout the day. Devanahalli is well connected to the other parts of the city via the six-lane NH-7 road. The upcoming ORR-Airport metro segment that is said to start from Central Silk Board Junction and end at Kempegowda International Airport will further add to the connectivity of this area. This project is said to be completed by 2024. The suburb rail project that is claimed to be completed in the next six years provides daily commuters with more options to travel from Devanahalli to the city.

Social Infrastructure: Devanahalli has the best of educational institutions, hospitals and entertainment centres. Some of the social infrastructures are Akash International School, Columbia Asia Hospital, Leena Multispeciality Hospital and Elements Mall. Not just that, there are a few upcoming projects like the Holiday Inn and Space City. Space City is an entertainment park that is proposed by the Karnataka government. This will further increase tourism in this area.

Now that you are aware of why Devanahalli is emerging as a popular real estate destination, you should definitely consider investing in this part of the city. This area offers a wide range of real estate opportunities and Merusri, the leading real estate company in India, has its new plotted development project — Merusri Serene situated in Devanahalli as well.

« Why are plotted developments the perfect places to live and invest in post COVID times? The year to invest in real estate »